The girl who served you your coffee this morning at the drive thru… you wouldn’t know that she’s homeless and she slept on her friend’s couch AGAIN last night.

If you can’t view this video here, visit You Wouldn’t Know directly on YouTube.

“Many homeless youth survive by couch surfing or living in cars instead of the dominant perception of sleeping on the streets and begging for change.”

The truth is that most of the homeless in Lethbridge, both youths and adults, fit in this category. They don’t have a place of their own to call home, but they aren’t sleeping out in Galt Gardens.

Does that surprise you?

In Lethbridge, our ‘rough homeless’ (people actually living and sleeping on the street, in alleys, etc…) numbers have dropped significantly, up to 90% by some accounts, in the last few years. But our homeless, in some cases, have just moved indoors, or found better ways to hide. 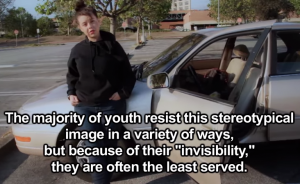 You wouldn’t know that they are crashing at a friend’s house, or on their aunt’s basement floor, or in their girlfriend’s car, or maybe at the Shelter. And, for the most part, they are trying to be invisible, to avoid other’s judgement and condemnation. They don’t want you to know.

Being invisible also makes them harder to help, though.

Challenge your perception of youth homelessness.

Let’s help them to stop being invisible by bringing them HOPE.

Streets Alive Mission is “Bringing Hope to Those Who Have None”. Our programs reach out into the community, into the spaces and places where the homeless (and yes, the homeless youth) live.

Just from looking at them, most of them, you wouldn’t know that they are homeless or in need. But they are. And we’re there with them. Bringing Hope.

Epidemyc: Youth from difficult homes and troubled families, homeless youth, and youth who need some positive relationships in their lives can connect through our Epidemyc Youth group.